Go Soe Loet arrived at Java island around the beginning of 20th century from Fujian. Working as a trader, he saw that many people love to drink coffee. So he decided to commence a business in coffee, in 1927. To memorise how he came to Java, he chose ‘steam ship’ as his brand. Kapal Api. Keeping the price down so the people could afford it, he blended his coffee with corn. Note that at that time, coffee has been sold as commodity without brand.

In 1968, Go’s son, Soedomo Mergonoto, began to work as a salesman in his father’s company. Another observation began. He saw an innovation of Unilever. When other companies sold soap in long bars to be sliced off, Unilever began to sell soap in pre-wrapped single-size bar. And more, Unilever advertised its product! When Soedomo took over the company from his father in 1978, he copied the innovation to his coffee product. He made an ad with Paimo (then a famous comedian in East Java) displayed taking a cup of coffee. It made a hit, and sales multiplied overnight. In 3 months, Kapal Api became the largest coffee company in Surabaya.

In 1982, Soedomo purchased a 500 kg/h roasting machine from Germany, assuming it would run 7 hours/day after a few years. Indeed, this machine was running 24 hours/day a year later. And soon, Kapal Api became the largest coffee company in Indonesia. Still, they had no plan to have their own plantation.

However, in 1986 the Indonesian Administration offered Kapal Api to take over an old coffee plantation on Mount Kalosi in Central Sulawesi. In exchange, Kapal Api must carry out the development of the area. Since then, Kapal Api manages all business of coffee: the plantation, roasting, and distribution. 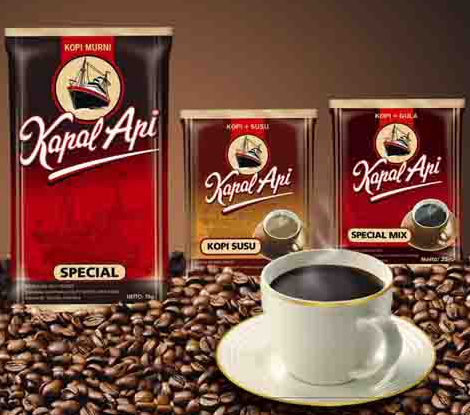 Now Kapal Api operates the largest coffee roasting machine in the world (5 T/hour). Yet, the smaller 500 kg/h machine is still operating. It also has several major brands of coffee in Indonesia (Excelso, Santos, etc), as well as the famous café Excelso. In Sulawesi, Kapal Api has built hundreds of kilometers of roads and 26 bridges.

To many Indonesians, coffee means the steam ship. (Extracted from Gabriella Teggia: A Cup of Java)